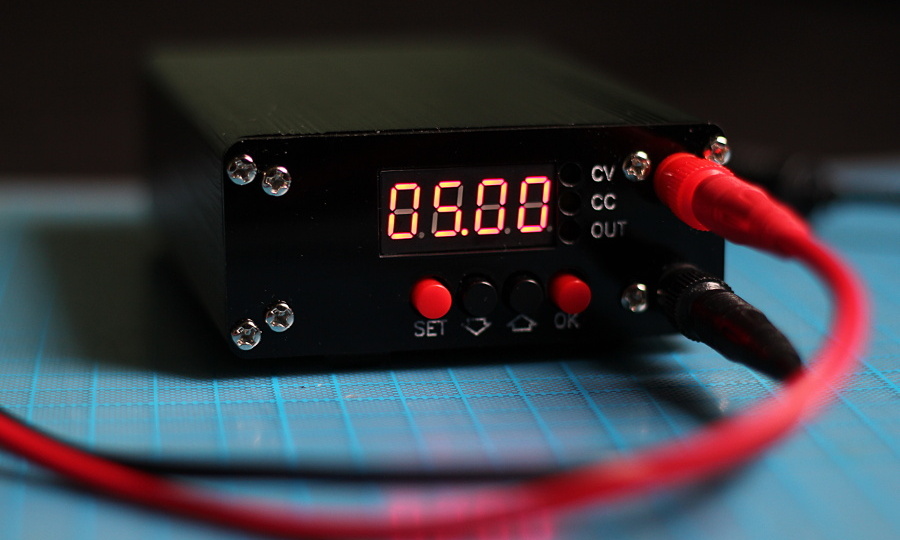 Not long ago I purchased this neat and compact DC to DC Buck Boost converter that performs reasonably well. It has a maximum output of 38V, 6A and has more than enough flexibility and features to be a secondary power supply in my lab.  I recently found a review of this product by Julian Ilett on his channel (which I’ve been following for a while) and the way it works is quite clever. The problem for me, however, is that it was a bit messy to have the bare circuit board laying around unprotected on my bench. The top-mounted panel wasn’t too practical either, and it was becoming increasingly clear that it was meant as an adjustable power converter module rather than a supply. 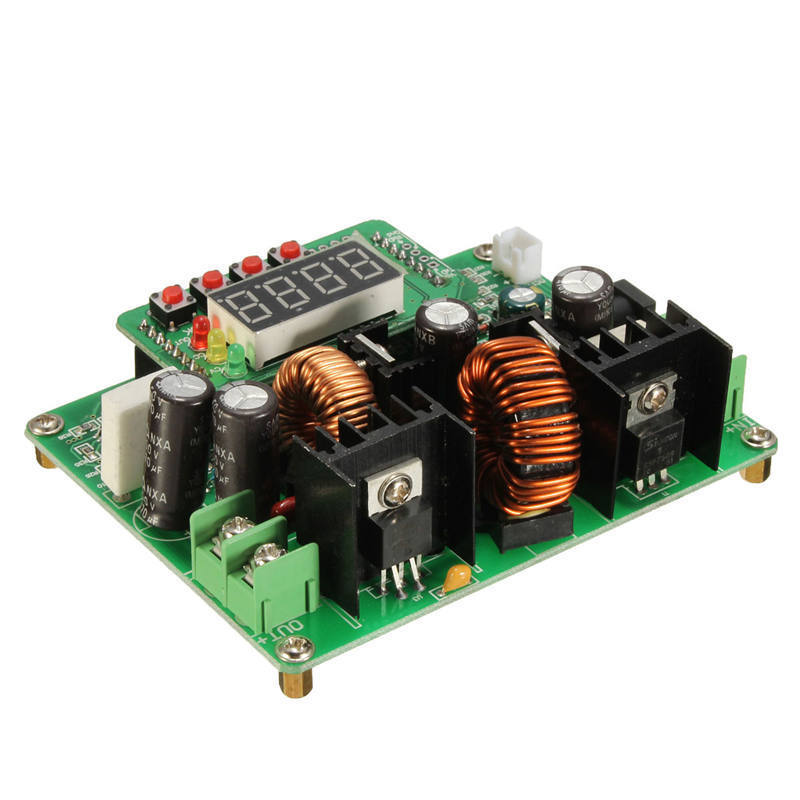 The DC-DC converter, as seen on most listings.

Having said that, I was set on making an enclosure for this unit, and it just happened that a few months before I had purchased an aluminum enclosure for a soldering station, that I couldn’t use for that project because they sent me one that was smaller, and the components did not fit inside. Fortunately, this enclosure was able to house this module rather nicely, provided that I found a way to mount the small top panel somewhere else, in the little space that was left.

Normally the interface/panel board sits right on top of the main base board, and it’s held in place by two 0.1″ pin headers, left and right side of the board. Assuming I was able to run a bunch of wires from the PCB headers to the panel, it was in theory possible to mount the control board on the front plate of the enclosure, with a couple of modifications:

To reconnect the front panel to the main board, I used standard male-female duPoint jumper wires. I designed a front panel using Inkscape, and also a small backplate that I laser-cut later, both in 3mm acrylic. The backplate holds the board in place with the help of nylon spacers. You can find the SVG file for those parts here. 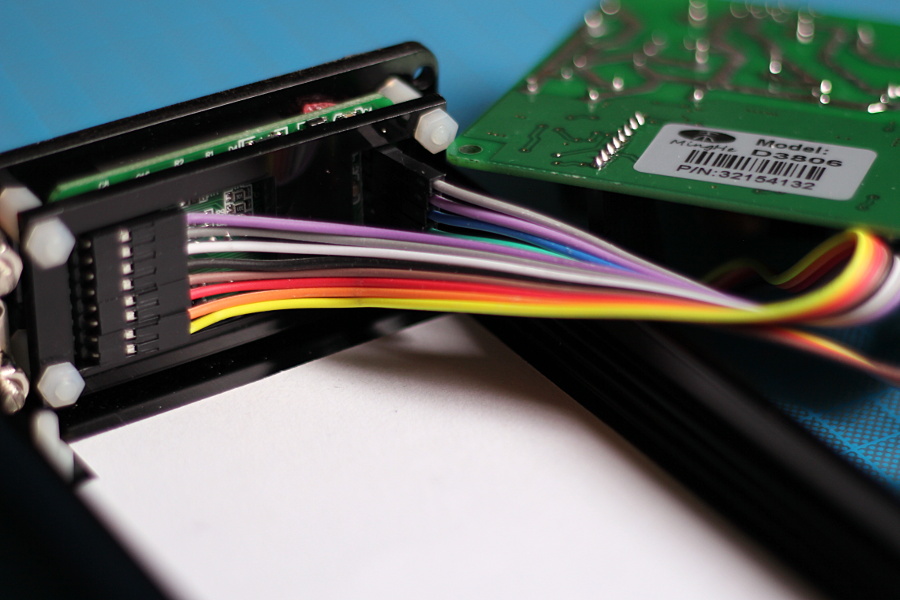 You can see here the side connector that was replaced by a 90° header, the acrylic backplate, and the nylon spacers.

I laid a piece of relatively thick paper inside the enclosure to better insulate the bottom side of the controller from the chassis. This piece of paper can be seen in the picture above, and was set in place with a bit of double-sided tape. The goal wasn’t to glue the whole paper to the bottom so I used Just enough so it didn’t move from its place under the circuit. I may replace this later with EVA foam.

This case has slots along the inner walls designed for sliding PCBs in, but since the main supply board is slightly narrower than the case, I had to use two nylon spacers (that I cut to size) to lift and position the board so the other side could slide right in, and rest inside one of them.

Once the board was in place it looked like this: 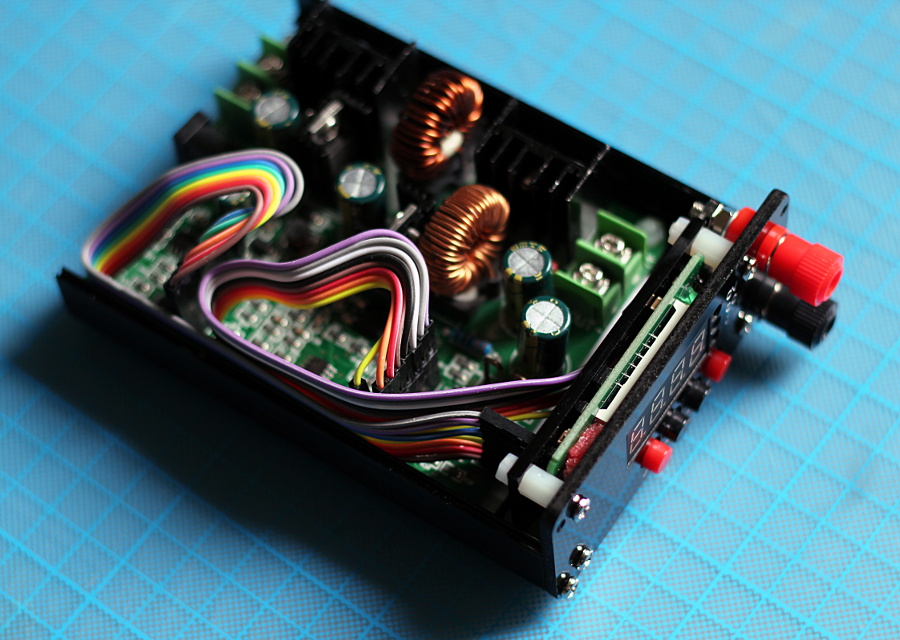 Almost there. It’s already obvious that wiring the output terminals in a safe way is not going to be trivial.

I did similar for the top side, but I covered the piece of paper in “Kapton” tape (because it was going to be pretty close to the transistors that get hot when a high voltage or high current output is selected), and used a more generous amount of double-sided tape to make sure it would stick to the “ceiling” and not fall over the PCB. 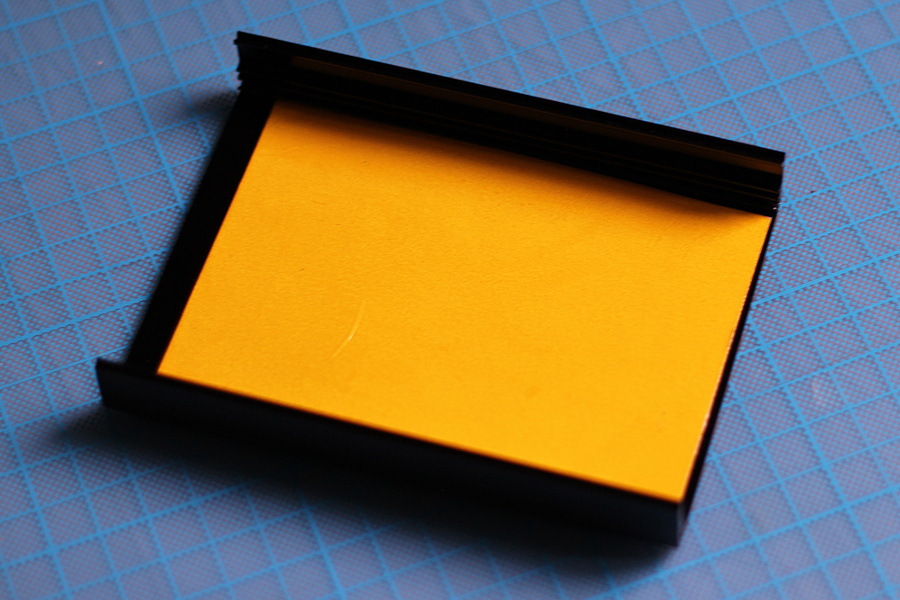 More like “Krapton”, really. It’s probably not real Kapton, but works I guess.

The trickiest part was the output connections. I had very little space to manouver so I used two short pieces of flexible sillicon-insulated 16AWG cable. Since the output terminals were close to both the metal enclosure and several screws, I had to provide redundant insulation to the connectors, which I achieved with heat-shrinking tubing and insulated crimp terminals. 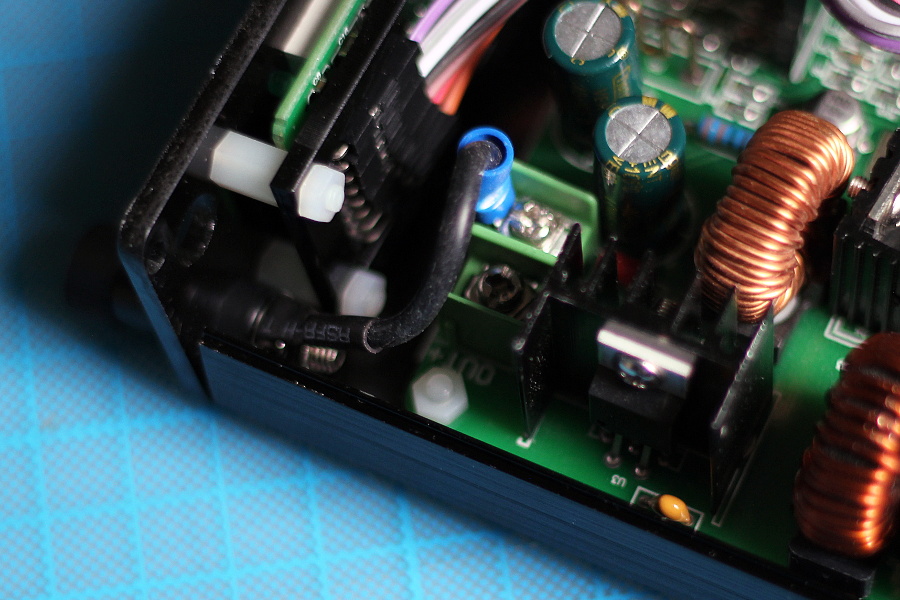 First step of the output insulation. 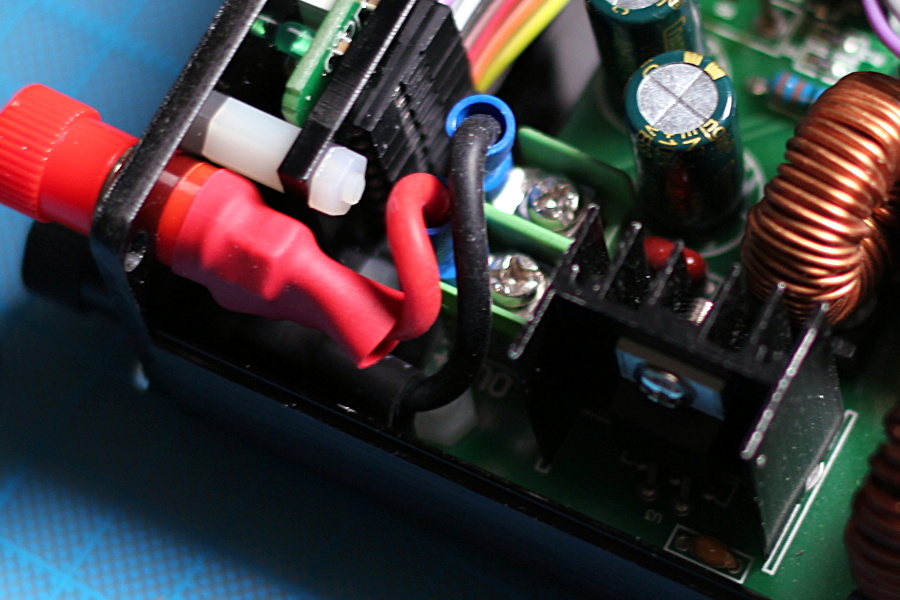 I don’t intend to push this supply to its limits, so I didn’t bother to consider active cooling (nor I had the space). It only has the included heatsinks and a few ventilation slits in the back panel. I’m powering this whole unit with a 24V, ~4A power brick, which roughly translates into 96W of power. With a 100% power efficiency, this booster should be able to deliver 32V, 3A, but of course no DC-DC converter is 100% efficient.  SInce in my tests I was able to achieve ~32V at 3A, I suspect that my 24V unit can deliver a bit more than 4A, making up for any loss in the conversion. But it cannot go higher from there. 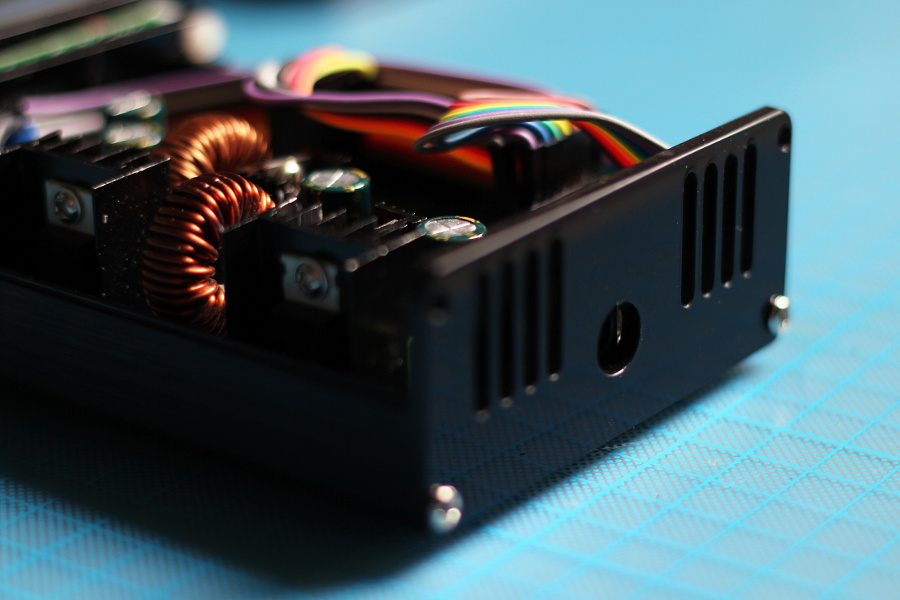 You can see the “Dust input” ports here. I mean, I’m sure they are not doing much for the ventilation so that’s their main function now.

I actually tested both max power and temperature. To do this I set my 120W dummy load to 3A and the supply to 32V. The heatsinks from the supply were at around ~22°C before I started the test. I used AWG12 supply leads to avoid any significant loss in voltage, and turned the load ON. To my surprise the voltage only dropped to around 31.7V, while outputting full 3 Amps. After 5 minutes I opened the case and measured the temperature of the switching transistors. The one that heats up the most is, of course, the transistor at the boost stage (a Silkron SSF7509) that reached ~65°C. I closed the case again and measured at the 10 minutes mark. This time the temperature was slightly above 80°C. According to the datasheet that transistor should be able to work up to 175°C, but I wasn’t really interested in taking it to that extreme. 80°C is already something I don’t want to subject this device to, ever again. I would never require 3A at 32V for more than a few minutes though. I’ll be using it as a lab power supply for testing and I won’t be powering high-current electronics with it for extended periods of time.

The fact that it was able to output 96W of power for 10 minutes straight (inside a very tight enclosure) without hitting half the max operating temperature (1) is quite outstanding, and more than enough for me.

If I ever use this for higher power requirements, however, I’ll simply move this whole thing to a bigger case where I can put at least a fan, a bigger heatsink, or both. Probably I’d also take the opportunity to put the AC/DC supply inside the case, and beef it up so it can comfortably output the voltage and current required.

I’m sure the highest voltage and current I’d need is 12V, 3A, which translates into 36W of power, which is well below the testing parameters.

As I’m using the on-board DC power jack to connect my 24V supply to this, there’s no power switch. To have an easy way of turning this unit ON/OFF I installed a small switch on my 24V power adapter, near its output connector. Not the best way of doing things, but it works. 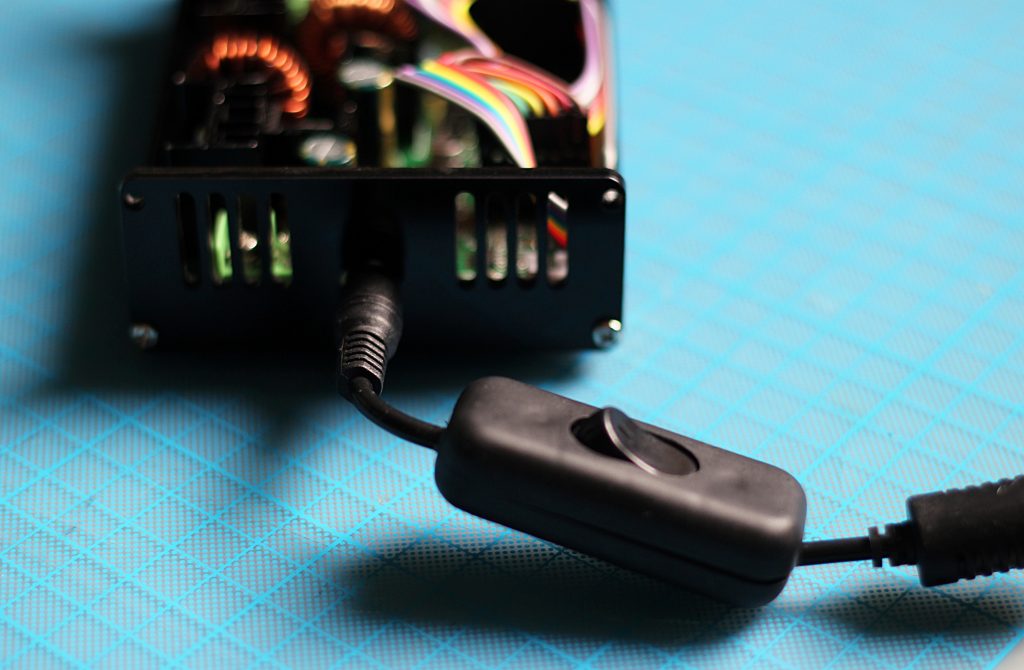 Closeup of the lamp switch I installed near the output of the “power brick”. I didn’t close the switch properly. Don’t judge me.

I used a bit of white acrylic paint to make the laser-engraved text more visible. I applied the paint with a piece of cloth and rubbed it gently, wiping off the paint on the surface, leaving only the small amount that was able to “fill” the engraved areas. Another thing I didn’t mention before, is that I also installed small 12×12 mm rubber feet under the unit. That helps with stability and it’s always a nice touch. 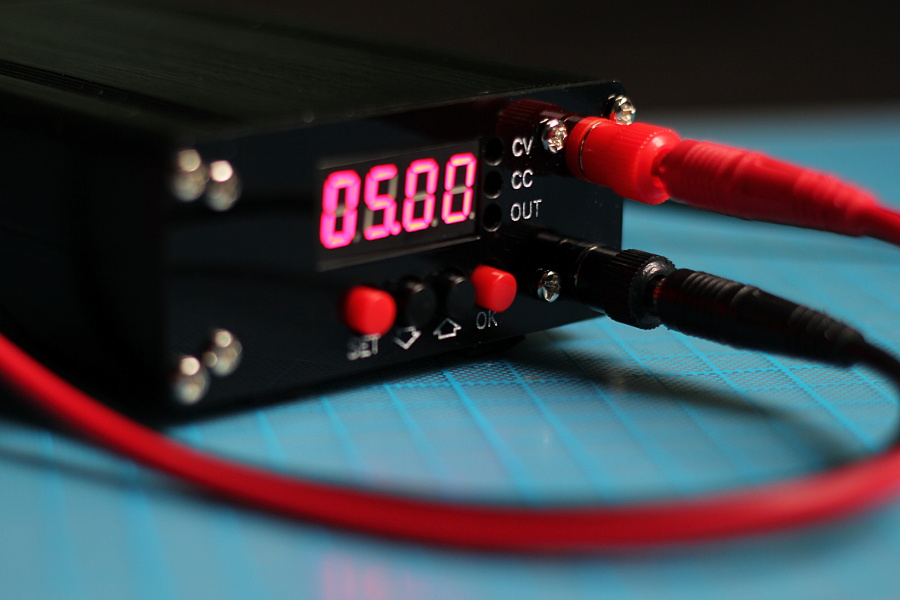 Despite being originally more of a converter than a supply, it works really well in this format. The case feels quite sturdy and I really like the final form factor with all the buttons and connections right there. It’s smaller than my Gophert CPS-3205, which is already quite compact. I haven’t run a noise analysis on the output but I expect it to be rather bad. This supply will be mostly connected to circuits with on-board capacitors and linear regulators, so it’s ok. I won’t be characterizing components or modules with it.

I’m also building a linear power supply that will have a more stable and reliable output, so I hope I can post the results of that in a near future. I’m just waiting for some minor components to arrive.